North of Clovis that is.

But an unbeaten streak — even one as remarkable as that — or championships are not in the forefront for the 2021 Spartans. Not even close.
Due to the pandemic, Friday will mark the first time in 66 weeks since the Spartans take the field in pads for their first practice of a truly unique spring 2021 season. De La Salle athletic director Leo Lopoz announced the team’s schedule this week, starting with a scrimmage against Las Lomas on March 6.
That will begin an abbreviated six-game season, all against Northern California foes, all touching their Contra Costa county border, per state guidelines.
DE LA SALLE SPARTANS FOOTBALL / 2021 schedule
They’ll play the first four games at home, starting with Sac-Joaquin Section power St. Mary’s (Stockton) on March 13 and finish off with two road games, including the finale April 17 at defending state Division 2-AA champion Clayton Valley Charter (Concord). the Spartans will play four East Bay Athletic League foes, along with another SJS squad, Jesuit (Carmichael).
All games are scheduled for 7 p.m. on Saturdays.
It’s been a painstaking and uphill battle just to gain a skeleton of a season. De La Salle coach Justin Alumbaugh was on the front lines with the Golden State High School Football Coaches Community to negotiate less strict guidelines with Gov. Gavin Newsom and state health officials for three weeks before securing a plan on Friday.
Every day, frankly, is a victory according to Alumbaugh.
“These guys have showed up and responded for more than 12 months,” he said. “It’s a great group. We may not be perfect on the field, but we’re happy to be there. We’re looking forward to getting on the pads and ramping it up.”
The talent on the field is considerable, and as stout as it’s been since 2015.
The Spartans have played in 14 consecutive state bowl title games — every one since California returned to a state title format in 2006 — and won seven. However it has lost the last four in a row in the Open Division, twice each to Mater Dei (Santa Ana) and St. John Bosco (Bellflower). Each of those winners were crowned not only state champions, but MaxPreps national champs.

This Spartans’ team is loaded at the skill position, even if third-year starting quarterback Dorian Hale (Sacramento State) and wide receiver-cornerback Lu Magia Hearns (Cal signee) had decide not to play. 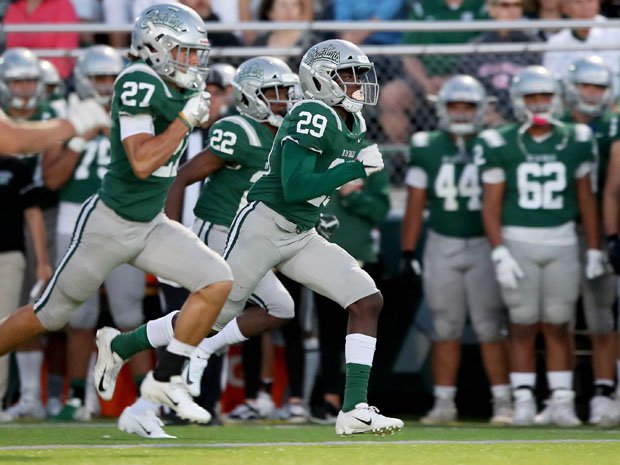 File photo by Dennis Lee
Zeke Berry (29) is one of the top and most versatile juniors in the state.

Both players told Alumbaugh earlier this week they planned to skip their spring season because it so close to their college football seasons.

Upon further review, the team’s top two senior prospects changed their mind on Wednesday. The Spartans will be at full strength.
“I have no trouble with their decision at all,” Alumbaugh said before the players changed their minds. “Absolutely great teammates. Great Spartans. They’re still key members of our team.”
Hale, who has accounted for more than 4,000 total yards and 41 touchdowns in his career, had planned to help out still as the team’s scout team quarterback. Hearns had largely been working out on his own.
By Wednesday afternoon, the idea of not playing with their teammates, even for a shortened season, was too much. Besides, they had put in a lot of preparation without a payoff.
“It was actually really heartwarming when they called (to return full-time),” Alumbaugh said.
Hearns said at a certain point, he had no “faith we’d have a season.” Once it became apparent the season was on, reality sunk in.
“It would be hurtful not only to my guys but also to me,” Hearns said. “Some of these guys I’ve played all four years. Some of the younger guys I want to keep helping. Other guys I’ve played with all my life and it seems only right to finish out our last year together.”

Other top players including three-way standout Zeke Berry, who will catch and carry the ball, and also star at safety. The 6-foot-1, 190-pound junior is one of De La Salle’s top recruits in years.
“He’s pretty ridiculous how good he is,” Alumbaugh said.
The team is loaded at running back with Mekhi Norfleet (5-11, 210) leading the pack, but watch out for Damonie Perkins, (6-1, 215) who will run the ball and be a run-stopper at linebacker.
The line, Alumbaugh’s specialty, is deep and versatile, led by tackles Luca Rossi and Owen Wardy, center Jon Puckett and a pair of talented tight ends, Brodie Tagaloa and Cooper Flanagan. The linebackers, led by Perkins, Kairo Reid and Amarion Houston, are superb as is the secondary.
“I’m so happy for these guys to have a season,” Alumbaugh said. “They’ve done everything we’ve asked and more.”
https://www.maxpreps.com/news/yyEZrIPkW0G2b8_L7-cczA/california-high-school-football–national-power-de-la-salle-ready-to-roll.htm
share