allsportstaff
Mater Dei (Santa Ana) had to wait 504 days to gain a measure of revenge against its arch rival St. John Bosco (Bellflower) on Saturday night. It took a freshman quarterback in Elijah Brown, not even enrolled at the school the last time the teams met, to lead the way in a resounding 34-17 season-ending victory at Santa Ana Stadium.
The 6-foot-2, 185-pound ninth-grader completed 14-of-23 passes for 202 yards and four touchdowns as the Monarchs led most of the way in one of the most anticipated games of the 2020-21 school year, fall, winter or spring.
St. John Bosco defeated Mater Dei 39-34 in the 2019 CIF Southern Section Division 1 championship game, and annually the two national powers meet to decide Trinity League and section crowns, that ultimately lead to possible state and national crowns.
This one finished off a short six-week regular season with no playoffs planned due to the pandemic. Most saw it as the unofficial state championship. None of it seemed to phase Brown.
After the fall season was postponed until the spring, he was named the starter, becoming just the fourth freshman quarterback in school history to do so under legendary coach Bruce Rollinson. The others: JT Daniels, Matt Barkley and Todd Marinovich.

The moment wasn’t too big, right from the start, as he directed the Monarchs on a 79-yard drive while completing 4-of-5 passes for 57 yards, including an 18-yard touchdown to four-star junior wide receiver CJ Williams, who made a sensational one-handed touchdown grab. That put Mater Dei up 7-0 with 6:46 left in the first quarter. 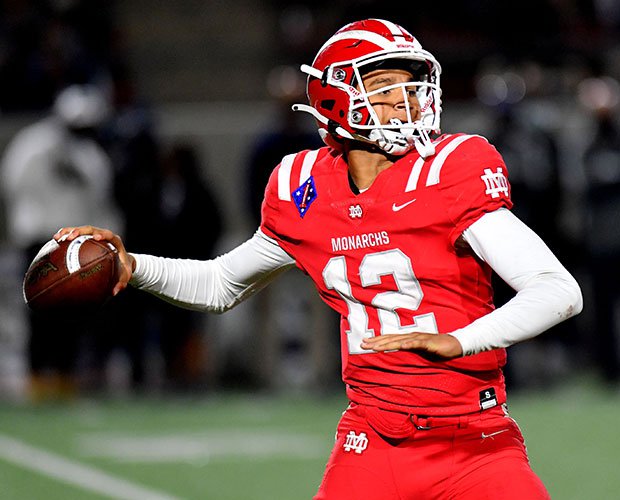 The Braves answered quickly as three-star running back Jabari Bates showed off his speed and took it to the house from 66 yards out to even the score, 7-7.

After three-star junior defensive tackle Jairus Satele recorded a sack on third down to force a punt, sophomore quarterback Pierce Clarkson led St. John Bosco on a six-play, 57-yard drive capped off by a great throw to tight end Matayo Uiagalelei. The four-star sophomore and brother of three-year starting Bosco QB DJ Uiagalelei (now at Clemson) made a tremendous 26-yard touchdown catch to give the Braves a 14-7 lead on the last play of the first quarter.
That was the last lead for the the 2019 MaxPreps national champions.

Brown connected with Williams for a second time, this one a 26-yard touchdown with 11:10 left in the 2nd quarter to tie it up at 14. Mater Dei got the ball right back and it took Brown one play to give the Monarchs the lead for good with his third touchdown, a 64-yard strike to USC signee Kyron Ware-Hudson. 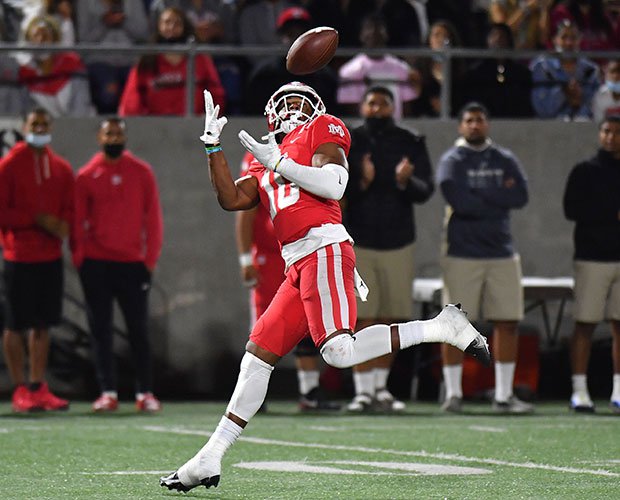 Chase Meyer connected on a 38-yard field goal with 2:04 left in the second quarter to put the Monarchs up 24-14 and three-star senior safety Shoes Brinkley intercepted Katin Houser in the end zone on the final play of the first half to keep Mater Dei up 10 at halftime.

The Braves defense forced a three-and-out to start the second half Clarkson led the Braves down field, finished off with a 37-yard field goal by Andre Meono with 7:07 left in the third quarter to cut the deficit to 24-17.

On the next possession, St. John Bosco was called for three defensive pass interference penalties, one coming on fourth-and-two from the Braves 22. That set up Brown’s fourth touchdown pass, a 13-yarder to Josiah Zamora to make it 31-17 with 2:58 left in the third. 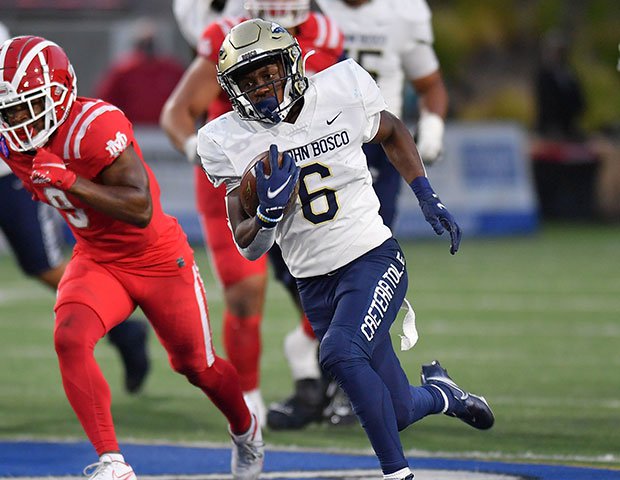 Photo by Louis Lopez
Bosco’s Jabari Bates rips off a 66-yard touchdown in the first quarter.

Houser led the Bosco down the field and on the first play of the fourth quarter it looked like he was going to run it in for a score. But Quincy Craig punched the ball out right before he crossed the goal line, Jacob Kongaika recovered in the end zone, giving the Monarchs the ball back at their own 20.

The turnover seemed to deflate the Braves as well.
Five-star USC commit Domani Jackson iced the game for Mater Dei with just over five minutes left as he intercepted Houser, setting up a 42-yard field goal by Meyer, making it 34-17 with 3:31 left.
The Monarchs finished spring a perfect 5-0 while outscoring opponents, 208-57. St. John Bosco (5-1) suffered its first loss since since Oct. 25, 2019.

Expect both teams to be ranked in the Top 5 when the MaxPreps Top 25 football rankings are released during the summer. With the win, the Monarchs own the inside track to start at No. 1. Mater Dei and the Braves had split their last 10 games, with Bosco holding a slim 295-287 cumulative score edge.