After weeks of discussions with the California Interscholastic Federation along with coaches and parent advocacy groups, Gov. Gavin Newsom on Friday morning updated the state’s stance on youth and high school sports.
The news was almost entirely positive.

Football, baseball, lacrosse, soccer, softball and lacrosse will be allowed to resume play Feb. 26, but with restrictions. The California Department of Public Health issued an updated guidance that permits competition for outdoor youth sports as long as county case rates remain below 14/100,00 and safety precautions are implemented. The CDPH reports 27 counties of the state’s 58 meet that requirement.

However many of the larger-populated counties, mostly in Southern California, don’t yet meet the requirement, including Los Angeles, San Bernardino and San Diego. Others in Central and Northern California that are above 14/100,000 are Sacramento, Contra Costa, Shasta and Fresno. (See all current rates below per the California Health and Human Services).

Clearly, though, meeting this standard is easier to beat than the state’s current tier system for youth sports. Also rates are dropping rapidly in all parts of the state.

The ability to begin starting Feb. 26 means football will now have a realistic chance of getting in at least five game seasons or more. Coaches are looking to play a 5-7 game schedule. The CIF, the state’s high school sports governing body, has said football teams can play until May 1. Many of the state’s 10 sections have set earlier dates.

“Youth sports are important to our children’s physical and mental health, and our public health approach has worked to balance those benefits against COVID-19 risks,” said Dr. Tomas Aragon, CDPH Director and State Public Health Officer. “With case rates and hospitalizations declining across California, we are allowing outdoor competition to resume, with modifications and steps to reduce risk, in counties where case rates are lower.”
That’s good and promising news to many, but it comes with some caveats.

• Indoor sports are not included in the guidance. Basketball, volleyball and wrestling will need for the rates to go down significantly but there is still time, perhaps in the final two months of school.

• Weekly testing will be mandatory. The state will pay for the tests, Newsom said during the press conference.

Serra (San Mateo, Calif.) football coach Patrick Walsh, who launched the now 900-member Golden State High School Football Coaches Community in December, warned earlier this week that all sports and regions likely wouldn’t be opened up, and that hard work is ahead.

But he saw Friday’s announcement as a clear victory. His group, that includes Torrey Pines (San Diego) coach Ron Gladnick and De La Salle (Concord) coach Justin Alumbaugh, combined with the 60,000-member Facebook organization Let Them Play CA, and the CIF have organized quickly to put pressure on the state to open things up.
“We were a pain in their neck,” Walsh said. “But we pushed hard and organized all in the name of kids.”

This is clearly their biggest breakthrough, especially for football, the state’s largest sport that boasts about 90,000 student athletes. A season looked doomed after several delays and state officials sticking to the state’s tiered system.

“A lot of people told us we couldn’t get this done,” Walsh said. “Moving a mountain can’t be done. You can’t go against mother nature. But with human nature anything is possible. With human beings, anything is possible. A lot of human beings have done a lot of amazing work to get to this point. More work needs to be done. But today is a good day.” 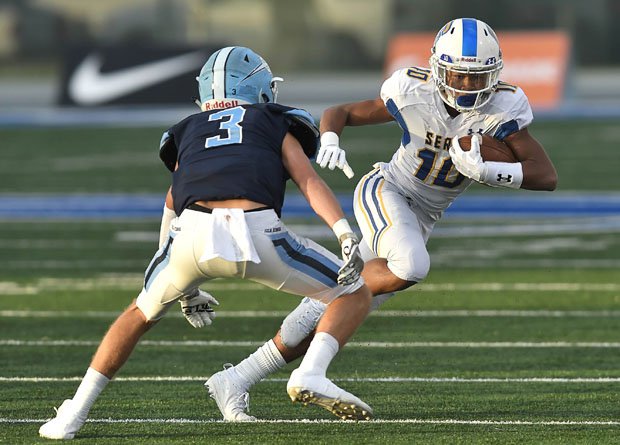 File photo by Heston QuanAction from the last day football was played in California, Dec. 14, 2019, when Corona del Mar defeated Serra 35-27 in the CIF D1-A title game.Walsh, Alumbaugh and Gladnick thanked Newsom and executive staff member Jim DeBoo and Dr. Mark Ghaly extensively for listening to the organization’s reason and data concerning getting youth and high school sports back safely.

“This was a great lesson for kids,” Gladnick said. “There are no guarantees in life and when odds are against you, you have to try. Many parents and coaches and volunteers tried on the behalf of kids. We moved government. It would have just as easy for Mr. Newsom and Deboo and their staff not to listen, but they listened.

“This was three weeks of truly hard work. This wasn’t about politics. It was about people.”

Said Alumbaugh: “This is a joyous day. It’s one of the first days in a long, long time that millions of kids can smile and look forward to something. Something that is in front of them, that is tangible and real as a group. That’s a wonderful thing.”

CIF Executive Director Ron Nocetti agreed that Friday was one of the better ones over the last several months.

“Today was a huge step in the right direction in providing a clear pathway for our school communities to get student athletes out there,” he said. “We still need to continue to advocate for a large number more to get them playing as well.”

All acknowledged that a lot of work is in front of many.

Other guidelines from the state Public Health agency include:

• Outdoor high-contact sports can be played in counties in the purple and red tier, with a case rate at or below 14 per 100,000. Weekly testing is required for football, rugby and water polo participants age 13 and over in counties with case rate between 7 and 14 per 10,000.

• Weekly testing, either antigen or PCR, is required for all participants and coaches in these sports, with results made available within 24 hours of competition. Football, rugby and water polo are high-contact sports that are likely to be played unmasked, with close, face-to-face contact exceeding 15 minutes.

• Outdoor, moderate-contact sports, such as baseball, cheerleading and softball, can be played in these countries without the testing requirement.

• Due to the nature and risk of transmission while participating in these sports, teams must provide information regarding risk to all parents/guardians of minors participating, and each parent shall sign an inform consent indicating their understanding and acknowledgment of the risks.

• Any team playing in a less restrictive sports tier are strongly encouraged to follow the steps outlined in the guidance to reduce risk of COVID-19 transmission. This includes wearing face coverings, practicing physical distancing, and appropriate hand hygiene and equipment sanitation.”

California’s announcement comes two days after Nevada re-opened many sports, but also with the caveat that Clark County, which includes most of the Las Vegas area, will not allow competition until in-person learning is in place. Currently it does not. More than 75 percent of the state’s 3.08 million residents call that county home.

California is one of 12 states hoping to play football in the winter or spring. Washington was the first to hit the field last weekend.

Massachusetts, North Carolina and Virginia have seasons scheduled later this month, while five others now, including Nevada, along with Illinois, Oregon, Maryland and New Mexico plus Washington D.C. — plan to start games in March.
Two other states — New York and Rhode Island — are still either working on a start date or considering taking 2020-21 off from football. Other states that have already canceled football: Connecticut, Hawaii, and Maine.

At many points over the last two months, California seemed destined to cancel. That changed on Friday. It probably wouldn’t have happened without the monumental efforts of the advocacy groups.

“We’re ecstatic,” Walsh said. “This is a massive first step in this process. We’ve been overwhelmed with love and thanks and overall gratitude. We can feel the souls of millions of kids lifted up today.”

Among them were his own players.

“To have a season now feels more empowering and exciting than ever before,” said Serra senior Fynn Williams. In all six years of me playing football, I’ve never been more hopeful and passionate about what is to come next.”

Christian Pedersen, Serra’s four-star tight end, already has signed to Louisville. But he can’t wait to suit up for a final time with his high school team.

“It just feels like I just had a crippling weight lifted off my shoulders,” he said. “I now feel more motivated then I have as a person in the last year.”

Said teammate, senior Sioeli Helu: “It feels like the world is starting to get back to normal and this is definitely a step in the right decision.”